CRT supports a variety of women’s empowerment and interfaith peace projects in Israel and the West Bank.  Projects include the Young Women’s Parliament and Women Reborn, both developed in partnership with Shin, the Israeli Movement for the Equal Representation of Women (Shin’s website: http://www.shin-women-equality.org.il/ )  A variety of other grassroots projects have also been supported by CRT over the past five years.

Young Women’s Parliament was developed in 2011 with a small grant from CRT.  The project brings Israeli Arab and Jewish high school girls together to work on issues of common concern. The project’s goals are to (1) increase understanding and tolerance between Israeli Jewish and Arab high school girls; (2) increase participants’ understanding about women’s rights and critical thinking about gender issues and feminist principles; (3) train a generation of potential leaders skilled in political advocacy and experienced in working on social and political issues with members of other groups. By building bridges between groups and giving the girls experience with social change, the p 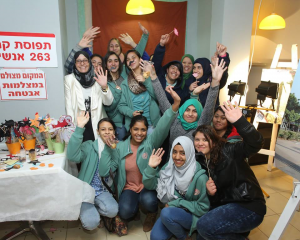 rogram hopes to increase the future participation of young women in conflict resolution.  In 2015, with CRT assistance, Shin received a sizeable USAID grant to expand YWP.  Currently, the program operates in nine Israeli towns and villages (5 Jewish and 4 Arab municipalities, including one Druze village).  Plans are currently being made to add another 7 municipalities, including one in the West Bank.