CRT traces its roots to a trip to Israel during the second Intifada.  At that time, newspapers were filled with stories of bombings, and fear was palpable.  Those who entered the old city of Jerusalem passed through a gauntlet of armed guards.  But a group of visitors to the Holy Land – including soon-to-be board members Howard Nelson and Andy Blanch – were surprised to encounter people of all faiths deeply committed to peace.  It quickly became clear that these peacemakers were isolated from each other, and that they felt ignored by the rest of the world

CRT grew out of a desire to help.  It was developed with one goal in mind: to find, support, and publicize effective interfaith grassroots peace efforts in areas of conflict.  Our model of action is based on the belief that people in local communities know better than anyone else what the solutions are to the problems they face.  Early efforts in Israel included facilitating the development of interfaith peace groups and women’s empowerment programs. An international interfaith women’s leadership workshop in Amman, Jordan, was the first activity outside of Israel. A women’s interfaith network in Sarasota, Florida, soon followed. Before long, we were also supporting women’s empowerment and interfaith peacebuilding efforts in Kenya and Honduras.

In the past few years, we have expanded efforts in the United States, with a particular emphasis on building and supporting inclusive, tolerant communities. We have also expanded our international vision, building connections, and networks among successful programs in different countries.  While we maintain a strong focus on faith communities and religious diversity, we also support efforts to promote justice for all groups experiencing discrimination or intolerance. We also recognize the importance of healing from the impacts of violence and trauma in building a more peaceful world. The picture below is a CRT trauma healing course at the Sarasota Community Bible Church. 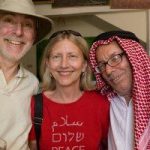 Through our informal networks, as well as through local, national and international partnerships, we identify individuals and groups with a vision for the future and the energy and passion to create sustainable change. We offer whatever support they need – whether it is financial, technical, conceptual, help with grant writing, access to media or policymakers, evaluation, or networking. By functioning as an almost completely volunteer organization, we maintain our commitment to putting resources directly in the hands of individual peacemakers.